THE PROOF IS IN THE ROOF 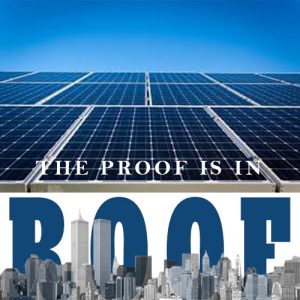 Rooftop solar power plant, even said rooftop solar system, is a photovoltaic plant that has its PV panels installed on the roof of a building. The urban environment provides a large amount of empty rooftop spaces and can inherently avoid the potential land use and environmental concerns.

If we want to meet the goal of 24×7 electricity to every citizen in the country, while reducing the pollution and smog enveloping our urban areas, the best solution for the medium term seems to be solar energy. But, while enormous progress has been made on that front, more needs to be done to take full advantage of the power of the sun.

The typical dimensions of a photovoltaic panel (power from 280 to 340 Wp based on efficiency and number of cells of which it is composed) is about 1mx2m, so 1 kWp of PV panels covers about 6-7 m2 of roof.

In addition to the size of the cover, the power of a rooftop solar system is also influenced by other factors such as the position, orientation and inclination of the roof.

The location of the building may limit the pv panels installation area and reduce the energy generation of the solar system due to shadows created by surrounding buildings or vegetation.

While ground-mounted photovoltaic plants (with fixed structure) are always facing directly south in the northern hemisphere and north in the southern hemisphere (Azimuth angle = 0°) and with an inclination equal to the latitude of the location (Tilt angle ≈ 30°/40°), rooftop solar systems are bound to the roof orientation and inclination. In general, solar panels that are oriented directly east or directly west will produce about 20 percent less electricity than if they were facing south, and if you change the tilt from 30 degrees to 15 degrees, your production then will be only 15 percent lower than if your panels were installed in peak conditions. Even with this decrease in performance, rooftop solar systems will produce enough energy for your needs.

The mounting structure of solar rooftop systems depends on the type of cover:
– Pitched roof mounting systems: when it comes to residential solar installations, solar panels are often found on sloped rooftops. Solar mounting systems for pitched roofs usually uses rails attached to the roof through shaped profiles anchored with bolts or screws under the roof tiles. PV panels are positioned on the rails and fixed with clamps.
– Flat roof: Commercial and industrial solar applications are often found on large flat rooftops. Solar mounting systems for flat roofs are commonly ballasted with few penetrations. Concrete blocks weight and position, and PV panels tilt (usually between 5°and 15°) are chosen according to the resistance of the roof and to prevent wind lift or other movement.
– Shed roof: typical of industrial roofs. PV panels are mounted on the sloping side of the sheds with structures equivalent to those used for pitched roofs, but directly anchored to the shaped metal sheet.
– Curved roof: In addition to the classic polycrystalline flat panels, flexible thin film panels with lower producibility, but more aesthetical adaptability, can be used.

Considerations on weight of the rooftop solar systems

On average, the distributed weight of conventional solar photovoltaic (PV) panels is about 30-60 Kgs/m2. The number and position of the load points must be appropriately calculated but generally such loads are acceptable.

Inverters (string type) are usually mounted on the outer wall of residential buildings, or directly on the roof for commercial/industrial buildings, but they can also be installed in special technical rooms, together with electrical cabinets and other main components.

A battery pack can add about 25-30% to the initial system cost of a rooftop solar system for one day autonomy, but ensures night-time energy supplies, enough power during clouds passage, and the possibility to reduce consumption at those hours when utility power is very expensive.

Where does India stand?

India accomplished 1 GW milestone for rooftop solar growth, which is about 113 percent growth in 2016 over 2015. Keeping in perspective that we have a target of achieving 40 GW by 2022, the current 1 GW capacity is an absolutely negligible achievement, so to say. Experts and analysts concluded that the rooftop potential in India is currently pegged at 1,24,000 MW. More than 30 per cent of this number can be easily achieved if 1.3% houses in India are made solar compatible. Major cities in India are still too slow to adopt solar.

To promote participation, the Government has recently offered 30 per cent subsidy for solar rooftop installation focused on net-metering. Also, 30 of the 36 states and Union Territories in India have agreed so far on net-metering policies. Even cities like Mumbai, Chennai and Delhi that have great potential for rooftop solar growth are yet to lead the rooftop revolution. This is also due to lack of shade free space in crowded Indian Metros and also because most people living in the metros still don’t own a roof.

Below are a few advantages you too can avail by installing a power plant at your premises:

Renewable Energy Source – Among the several benefits of solar panels, the most important thing is that solar energy is truly a renewable resource. It can be utilized in all areas of the world and is available every day. We can never run out of solar energy unlike some of the other sources that are being used excessively. Solar energy is readily accessible and available to us for as long as we have the sun which according to scientists is going to stay for at least next 5 billion years. The cost of solar panels has also fallen by 75% that should encourage everyone to go for solar.

Provides energy security– Another top benefit of installing solar panels is that no one can go and buy or turn sunlight into a monopoly. Combined with the ease of solar panels, this also provides a notable solar power advantage of energy security. This is why governments are investing huge amount of money into the development and installation of solar power systems.

Decrease the carbon footprint –Solar power decreases your carbon footprint as well. Carbon dioxide has been known to cause global warming that is causing havoc on our Earth further causing glaciers to melt, animals to be endangered and shorelines to erode. For example, solar power can help conserve more than 16000 gallons of water per year and also decrease dependence on non-renewable sources of energy. Reducing the mileage from 15,000 to 10,000 can save more than a ton of CO2 which is around 15% of the average person’s footprint.

Technology Development– The technology in the solar power industry is continuously advancing and improvements are sure to intensify in the future. Innovations in nanotechnology and quantum physics can increase the effectiveness of solar panels or increase multi-folds the electrical output.

Low Maintenance Costs– Solar power systems don’t require a lot of maintenance. All you need to do is keep them relatively clean. The reliable solar power companies give 20-25 years of warranty. There is no wear and tear and the inverter is the only part that needs to be changed after 5-10 years. Basically, there is very little spending on maintenance and repair work.

Reduce electricity bills and Increase Savings– As some of the energy needs will be met by the solar power system, the energy bills are sure to drop. It also depends on the size of the solar panel system and the electricity usage. Not only you will save on the bill, but also generate more electricity than you can use, the surplus of which will be exported back to the grid provided it is connected.